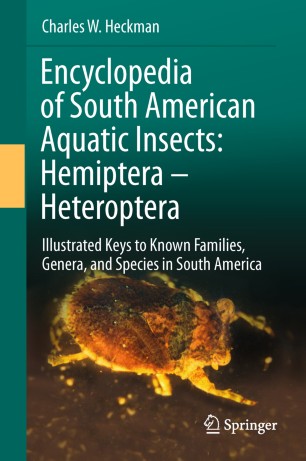 Hemiptera - Heteroptera encompasses the three well-defined suborders of the true bugs which are adapted to an aquatic or littoral habitat.  The book begins with a section on the biology these insects and provides illustrations of the basic features of their morphology and outlines the larval development.  Brief outlines of the ecological and zoogeographical peculiarities of the three aquatic suborders are presented individually, and various methods for observing, collecting, preserving, rearing, and examining specimens are discussed.

Most of the book is devoted to keys for the identification of adults to species, and notes are provided that will help recognize the known larvae.  Unlike most other aquatic insects, the larval instars of the heteropteran species closely resemble the adults in their morphology, preferred habitats, and feeding habits.  Therefore, distinguishing features of those relatively few larvae which have been described in detail are usually mentioned in the keys to the adults rather than being included in separate keys.  In addition to the most important features for determining the individual species, many keys include additional notes on the morphology, which is intended to give the user a better chance of recognizing specimens of species not yet known to science.  After the currently recognized name of each species, the known range is provided.  Regions of the world outside of South America, South American countries, and the states of Brazil from which the species has been reported are listed.  Following the range information, major synonyms previously used for the species  in the literature are provided.  If subspecies have been

described and are still recognized as such, they are also discussed.  Finally, if the status of the species is regarded as uncertain because of a poor description, strong resemblance to another species, or any other reason, a note is added that a detailed study will be necessary to clarify the status of the taxon.  Taxonomic revisions in the book itself are strictly avoided.

To provide the user of the keys with maximum assistance in making reliable identifications, the book is richly illustrated with pen and ink drawings of thousands of individual morphological structures arranged in 820 figures.  The book is intended to make a significant impact toward popularizing the study of South American water bugs by assembling and condensing the information in hundreds of individual publications on the group, which appeared in many books and journals published in many different countries over the past 200 years.  Some of these works are very difficult to obtain in South America, and their lack creates serious impediments to systematic, ecological, and zoogeographical research.  In the more than 730 titles appearing in the bibliography, the original descriptions and revisions of almost all South American species can be found.