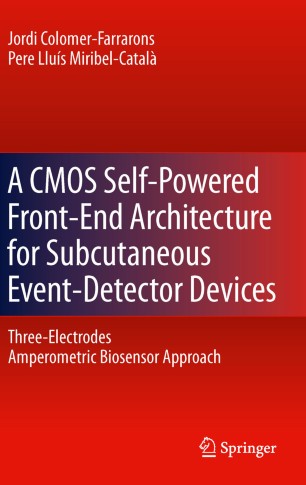 A CMOS Self-Powered Front-End Architecture for Subcutaneous Event-Detector Devices presents the conception and prototype realization of a Self-Powered architecture for subcutaneous detector devices. The architecture is designed to work as a true/false (event detector) or threshold level alarm of some substances, ions, etc... that are detected through a three-electrodes amperometric BioSensor approach. The device is envisaged as a Low-Power subcutaneous implantable application powered by an inductive link, one emitter antenna at the external side of the skin and the receiver antenna under the skin.

The sensor is controlled with a Potentiostat circuit and then, a post-processing unit detects the desired levels and activates the transmission via a backscattering method by the inductive link. All the instrumentation, except the power module, is implemented in the so called BioChip. Following the idea of the powering link to harvest energy of the magnetic induced link at the implanted device, a Multi-Harvesting Power Chip (MHPC) has been also designed.

Dr. Jordi Colomer-Farrarons received his BSc. degree in Electrical Engineering from EUSS (Salesians Technical Engineering School) in 2002. From 2002 to 2005 he worked as hardware design engineer at the automotive company Francisco Albero SA. In 2005, he received his MSc. degree in Electrical Engineering from University of Barcelona (UB). In 2010 he received his PhD degree from the UB. Since 2009, he works as fellow researcher at the BioEngineering and NanoBioEngineering-SIC-BIO Group of the UB, focusing on low-voltage low-power circuits, smart power, harvesting circuits, interface circuits for biomedical applications, and microelectronic design. From April to July 2009, he joined the Designs Service Department at IMEC's INVOMEC Divison (Belgium).

Dr. Pere Miribel-Català received his MSc. degree in Physics from the University of Barcelona (UB) in 1994. From 1993 to 1999 he was research fellow at Systems for Instrumentation and Communications Laboratory (SIC Lab) of the University of Barcelona working on high voltage smart power circuits and microelectronic design. He was visiting research fellow in 1998 at LAAS-CNRS laboratory (Toulouse, France). He received his PhD degree from the University of Barcelona in 2000. He also worked designing power management integrated DCDC converters during a postdoctoral stage at the design center of ON semiconductor Inc. (Toulouse, France). Since 2003 he is Associate Professor at the Electronics Department and part of the BioEngineering and NanoBioEngineering-SICBIO Group of the University of Barcelona. His research topics are focused on low-voltage low-power integrated circuits, interface and analog processing circuits, particularly for biomedical applications, smart power and power management circuits.