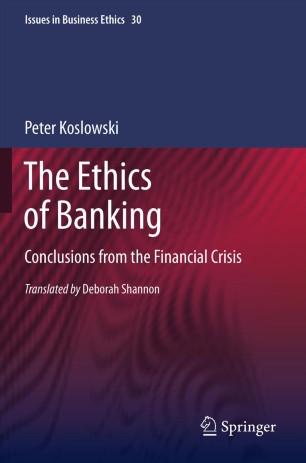 The Ethics of Banking

Conclusions from the Financial Crisis

This book analyzes the systemic and the ethical mistakes that have led to the financial crisis of 2008. It explores the middle ground between the argument that financial managers cannot be expected to take responsibility for a systemic crisis and the argument that moral failure is the one and only origin of the crisis. The book investigates the role of speculation in the formation of the crisis. It distinguishes between productive speculation for hedging and for securing market liquidity on the one hand, and unproductive and even detrimental hyper-speculation, on the other. The book argues that hyper-speculation goes far beyond the degree of speculation that is necessary for the liquidity of financial markets in a developed economy, and has thus increased the risks of the financial system and will continue to do so. This book offers an ethics of banking and an ethical economy of the financial markets to counterbalance the financial industry’s purely economic approach.