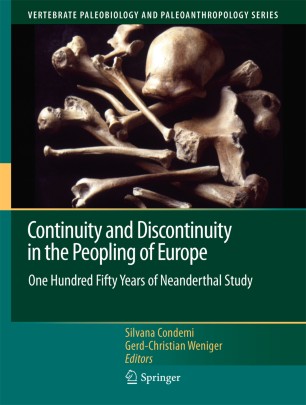 Continuity and Discontinuity in the Peopling of Europe

Since the Western world first became aware of the existence of Neanderthals, this Pleistocene human has been a regular focus of interest among specialists and also among the general public. In fact, we know far more about Neanderthals than we do about any other extinct human population. Furthermore, over the past 150 years no other palaeospecies has been such a constant source of discussion and fierce debate among palaeoanthropologists and archaeologists. This book presents the status of our knowledge as well as the methods and techniques used to study this extinct population and it suggests perspectives for future research.

Silvana Condemi is an anthropologist who studied at the Universities of Paris VI and Bordeaux (France).  She is currently Director of Research at the Centre National de la Recherche Scientifique (CNRS) in the laboratory of Anthropology at the University of Marseille, where she directs the unit of paleoanthropology. She has specialized in Pleistocene human evolution, in particular concerning the origin and evolution of Neanderthals and on the emergence of modern humans. She conducts field work in the Middle East and Europe. Her research focuses on interpretation of the archeological record, on patterns of human anatomical variation, the relationship between genetics and environment, ecogeographical patterning and, more recently, collaboration on ancient DNA analysis and modelling of Neanderthal populations.

Gerd-Christian Weniger is a palaeolithic archaeologist with special interest in human cultural and biological evolution during the Upper Pleistocene in Europe and the Near East. Since 1991 he is professor of Prehistory at the University of Cologne and since 1996 he is director of the Neanderthal Museum. His current research includes the Middle to Upper Palaeolithic transition in Europe. As director of the Neanderthal Museum he is engaged in various research projects including field work in the Western Mediterranean and directing NESPOS an interactive online database on the archaeology and anthropology of Neanderthals.