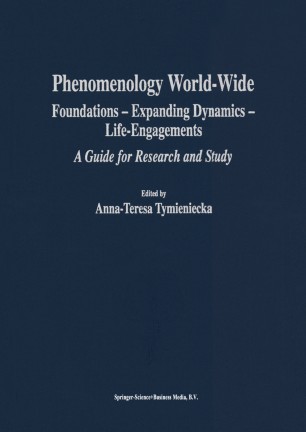 Foundations — Expanding Dynamics — Life-Engagements. A Guide for Research and Study

Phenomenology is the philosophy of our times. Through the entire twentieth century this philosophy unfolded and flourished, following stepwise the intrinsic logic and dynamism of its original project as proposed by its founder Edmund Husserl. Now its seminal ideas have been handed over to a new era. The worldwide contributors to this volume make it manifest that phenomenological inspiration knows no cultural barriers. It penetrates and invigorates not only philosophical disciplines but also most of the sectors of knowledge, transforming our way of seeing the world, our actions toward others, and our lives.
Phenomenology's universal spread has, however, oftentimes diluted its original sense, even beyond recognition, and led to a weakening of its dynamics. There is at present an urgent need to retrieve the original understanding of phenomenology, to awaken its dormant forces and redirect them. This is the aim of the present book: resourcement and reinvigoration. It is meant to be not only a reference work but also a guide for research and study.
To restore the authentic vision of phenomenology, we propose returning to its foundational source in Husserl's project of a `universal science', unpacking all its creative capacities. In the three parts of this work there are traced the stages of this philosophy's progressive uncovering of the grounding levels of reality: ideal structures, constitutive consciousness, the intersubjective lifeworld, and beyond. The key concepts and phases of Husserl's thought are here exfoliated. Then the thought of the movement's classical figures and of representative thinkers in succeeding generations is elucidated. Phenomenology's geographic spread is reviewed.
We then proceed to the culminating work of this philosophy, to the phenomenological life engagements so vigorously advocated by Husserl, to the life-significant issues phenomenology addresses and to how it has enriched the human sciences. Lastly the phenomenological project's new horizons on the plane of life are limned, horizons with so powerful a draw that they may be said not to beckon but to summon. Here is the movement's vanguard.
This collection has 71 entries. Each entry is followed by a relevant bibliography. There is a helpful Glossary of Terms and an Index of Names.