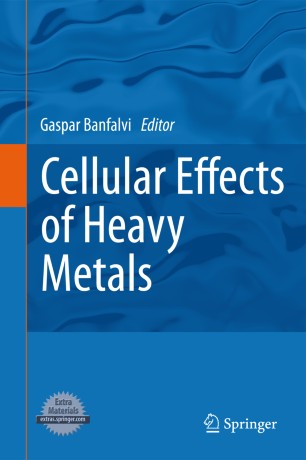 The term “heavy metals” is used as a group name of toxic metals and metalloids (semimetals) causing contaminations and ecotoxicity. In strict chemical sense the density of heavy metals is higher than 5 g/cm3. From biological point of view as microelements they can be divided into two major groups. a. For their physiological function organisms and cells require essential microelements such as iron, chromium (III), cobalt, copper, manganese, molidenium, zinc. b. The other group of heavy metals is toxic to the health or environment. Of highest concern are the emissions of As, Cd, Co, Cu, Hg, Mn, Ni, Pb, Sn, Tl. The toxicity of heavy metals is well known at organismal level, while less attention has been paid to their cellular effects. This book describes the toxicity of heavy metals on microorganisms, yeast, plant and animal cells. Other chapters of the book deal with their genotoxic, mutagenic and carcinogenic effects. The toxicity of several metals touch upon the aspects of environmental hazard, ecosystems and human health. Among the cellular responses of heavy metals irregularities in cellular mecha nisms such as gene expression, protein folding, stress signalling pathways are among the most important ones. The final chapters deal with biosensors and removal of heavy metals. As everybody is eating, drinking and exposed to heavy metals on a daily basis, the spirit of the book will attract a wide audience.