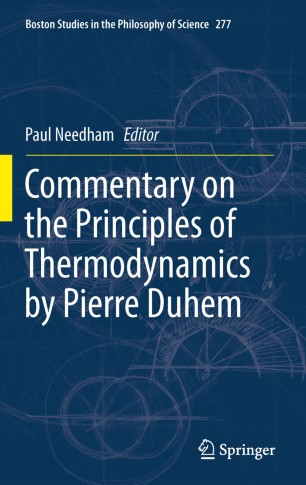 Commentary on the Principles of Thermodynamics by Pierre Duhem

Part of the Boston Studies in the Philosophy of Science book series (BSPS, volume 277)

Pierre Duhem (1861–1916) held the chair of theoretical physics at Bordeaux from 1894 to his death. He established a reputation in both the history and philosophy of science as well as in science itself (physics and physical chemistry). Much of his work in the first two areas has been translated into English, but little of his technical scientific work. The present volume contains early work of Duhem’s illustrating his interest in the rigorous development of physical theory for which he is famous. It opens with what was the first critical discussion of Gibbs’ groundbreaking "On the Equilibrium of Heterogeneous Substances" (1876-8), where Duhem addressed the problem that, as he put it, "Mathematicians regret that the principles of Thermodynamics should have been developed in general with so little precision that the same proposition can be regarded by some as a consequence, and by others as a negation, of these principles". The other papers, forming a three-part series, pursue this project of putting the foundations of thermodynamics on a clearer and more secure basis. This book will be of interest to scholars in history and philosophy of science, especially those interested in the development of physical chemistry and the work of Pierre Duhem.