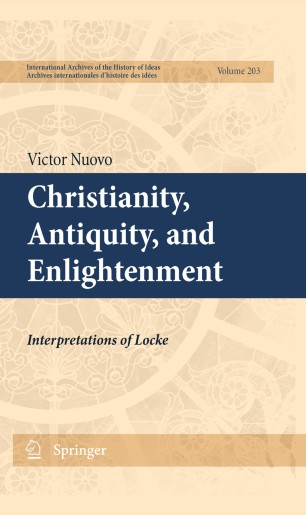 It is commonly accepted that John Locke was the father of the English Enlightenment and the founder of modern political liberalism. These are at best half-truths that, when uncritically employed, have the effect of casting him as the precursor secular modernism, as a thinker with little interest in the themes explored in the several chapters of this book. Here a different Locke appears; a Christian Virtuoso, an experimental natural philosopher who believed that practicing the new science prepared the mind for revealed truth; an eclectic philosopher, who was receptive to the philosophical heritage of Antiquity and subject to its enlightening influence, but who appropriated from ancient philosophical systems only what he found useful to sustain his Christian philosophical program; a biblical theologian who used critical historical methods to recover the original Christian revelation, whose truth Locke never doubted; a Christian dutifully engaged in perfecting his faith; and a pilgrim in this world awaiting the coming of the next. The Lockean path from Christianity through the revival of Antiquity to Enlightenment is shown to be a meandering one that often turned back upon itself. Others, following in his train, would carry it to its destination. The aim of these studies is not to diminish Locke¹s philosophical greatness, which is beyond dispute, but to reveal the unexpected richness of his mind, its complexity, the ambiguities and curious turns of thought that find expression in his writing, and the depth of his thinking.