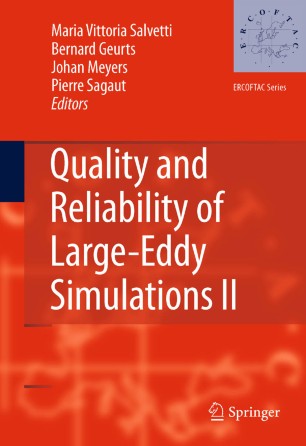 The second Workshop on "Quality and Reliability of Large-Eddy Simulations", QLES2009, was held at the University of Pisa from September 9 to September 11, 2009. Its predecessor, QLES2007, was organized in 2007 in Leuven (Belgium). The focus of QLES2009 was on issues related to predicting, assessing and assuring the quality of LES. The main goal of QLES2009 was to enhance the knowledge on error sources and on their interaction in LES and to devise criteria for the prediction and optimization of simulation quality, by bringing together mathematicians, physicists and engineers and providing a platform specifically addressing these aspects for LES. Contributions were made by leading experts in the field. The present book contains the written contributions to QLES2009 and is divided into three parts, which reflect the main topics addressed at the workshop: (i) SGS modeling and discretization errors; (ii) Assessment and reduction of computational errors; (iii) Mathematical analysis and foundation for SGS modeling.