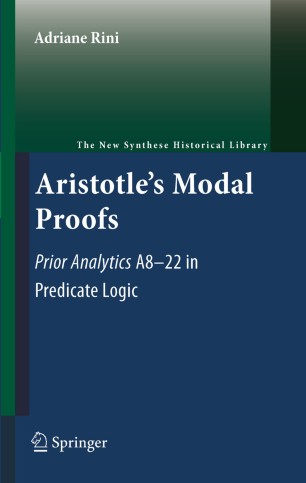 Prior Analytics A8-22 in Predicate Logic

Aristotle’s modal syllogistic is his study of patterns of reasoning about necessity and possibility. Many scholars think the modal syllogistic is incoherent, a ‘realm of darkness’. Others think it is coherent, but devise complicated formal modellings to mimic Aristotle’s results. This volume provides a simple interpretation of Aristotle’s modal syllogistic using standard predicate logic. Rini distinguishes between red terms, such as ‘horse’, ‘plant’ or ‘man’, which name things in virtue of features those things must have, and green terms, such as ‘moving’, which name things in virtue of their non-necessary features. By applying this distinction to the Prior Analytics, Rini shows how traditional interpretive puzzles about the modal syllogistic melt away and the simple structure of Aristotle’s own proofs is revealed. The result is an applied logic which provides needed links between Aristotle’s views of science and logical demonstration. The volume is particularly valuable to researchers and students of the history of logic, Aristotle’s theory of modality, and the philosophy of logic in general.

Adriane Rini received an A.B. in philosophy at Smith College, and a Ph.D. at the University of Massachusetts-Amherst. She is the author of numerous articles on the history of modal logic. In 2003, she was awarded a Marsden Grant from the Royal Society of New Zealand for her research on Aristotle’s logic. Subsequently, she has been working on a book, together with M.J. Cresswell, about the world-time parallel. In 2010, Rini is working on a project on the development of Quine’s attitude to modal logic, for which she has been awarded a four month fellowship from the Royal Flemish Academy of Belgium for Science and the Arts. Rini has taught at the University of Massachusetts-Amherst, the University of California-Davis, Texas A&M University, Victoria University Wellington, and at Massey University, where she is currently a senior lecturer in philosophy.