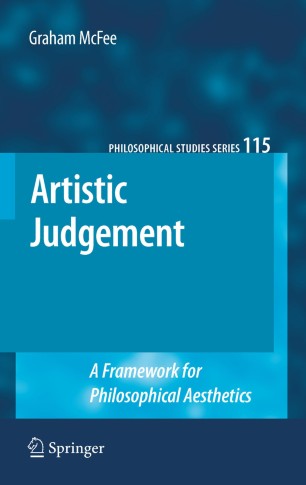 A Framework for Philosophical Aesthetics

Artistic Judgement sketches a framework for an account of art suitable to philosophical aesthetics. It stresses differences between artworks and other things; and locates the understanding of artworks both in a narrative of the history of art and in the institutional practices of the art world. Hence its distinctiveness lies in its strong account of the difference between, on the one hand, the judgement and appreciation of art and, on the other, the judgement and appreciation of all the other things in which we take an aesthetic interest. For only by acknowledging this contrast can one do justice to the importance regularly ascribed to art. The contrast is explained by appealing to an occasion-sensitive account of understanding, drawn from Charles Travis directly, but with Gordon Baker (and Wittgenstein) as also proximate rather than remote. On this basis, it argues, first, that we need to offer accounts of key topics only as far as questions might be raised in respect of them (hence, not exceptionlessly); and, second, that we should therefore defend the view that the meaning of artworks can be changed by later events (the historical character of art, or forward retroactivism) and that art has an institutional character, understood broadly on the lines of Terry Diffey’s Republic of Art. Besides providing a general framework, Artistic Judgement also explores the applications of the ideas to specific artworks or classes of them.