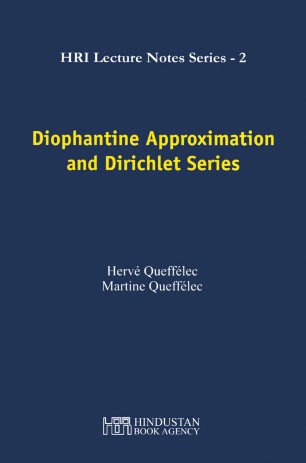 This self-contained book will benefit beginners as well as researchers. It is devoted to Diophantine approximation, the analytic theory of Dirichlet series, and some connections between these two domains, which often occur through the Kronecker approximation theorem. Accordingly, the book is divided into seven chapters, the first three of which present tools from commutative harmonic analysis, including a sharp form of the uncertainty principle, ergodic theory and Diophantine approximation to be used in the sequel. A presentation of continued fraction expansions, including the mixing property of the Gauss map, is given. Chapters four and five present the general theory of Dirichlet series, with classes of examples connected to continued fractions, the famous Bohr point of view, and then the use of random Dirichlet series to produce non-trivial extremal examples, including sharp forms of the Bohnenblust-Hille theorem. Chapter six deals with Hardy-Dirichlet spaces, which are new and useful Banach spaces of analytic functions in a half-plane. Finally, chapter seven presents the Bagchi-Voronin universality theorems, for the zeta function, and r-tuples of L functions. The proofs, which mix hilbertian geometry, complex and harmonic analysis, and ergodic theory, are a very good illustration of the material studied earlier.