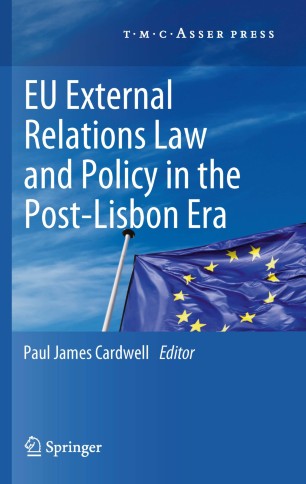 EU External Relations Law and Policy in the Post-Lisbon Era

EU External Relations Law and Policy in the Post-Lisbon Era is a collection of works which considers the many different facets of the EU’s increasingly important engagement with the world beyond its borders. The Treaty of Lisbon, which came into effect in December 2009, made significant changes to the powers and competences endowed on the EU institutions. The contributions to this collection consider both the direct and indirect impact of the Treaty on the contemporary state of EU external relations. The authors are drawn from legal, political science and international relations disciplines and their contributions consider innovations or changes brought about by the Treaty itself, including the establishment of the European External Action Service, the roles of the High Representative and President, the collapse of the ‘pillar’ structure and new competences in areas such as defence and foreign investment. Other chapters cover developments which reflect the latest incremental changes upon which the post-Lisbon Treaty arrangements have some bearing, including climate change, transatlantic and neighbourhood relations and the external dimension of ‘internal’ security.

The views, considerations and recommendations presented in this book are of particular interest to the large community of academics and policy makers working in the field of EU external relations law and foreign policy, as well as in European studies more generally. Being one of the first published works considering the changes brought about by the Treaty of Lisbon it offers a solid basis for policy development and will further the interdisciplinary debate on all levels within the EU.

Dr. Paul James Cardwell is a Senior Lecturer and the Deputy Director of the Sheffield Centre for International and European Law (SCIEL) at the School of Law, University of Sheffield, United Kingdom.