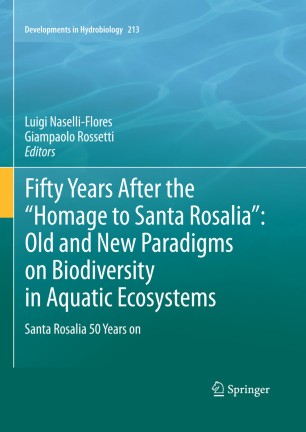 Fifty years after the ‘‘Homage to Santa Rosalia’’: Old and new paradigms on biodiversity in aquatic ecosystems

Part of the Developments in Hydrobiology 213 book series (DIHY, volume 213)

This book celebrates the fiftieth anniversary of publication of one of the landmarks of the modern ecological thought: the “Homage to Santa Rosalia or why are there so many kinds of animals” by George Evelyn Hutchinson. Published in 1959 in the journal “The American Naturalist”, this article has been the engine which have moved most of the ecological research on biodiversity in the last half a century. Hutchinson starts his article by telling the legend of Santa Rosalia, a hermit who died in the second half of the XIII century and who spent the last years of her life in a cave nearby a pond. In this pond Hutchinson collected two species of aquatic insects and took the inspiration to explore the reasons why life is present on our Planet in such amazing variety of forms. This article thus inaugurated the season of research on biodiversity. Researchers and students in the field of ecology are the readers to whom this book is mainly addressed but also those involved in the history of Science will find in this book useful information. Issued in 2010, which has been declared “international Year of Biodiversity” by the United Nations, this book is also a tribute to the biological diversity allowing, enriching and sustaining human life.