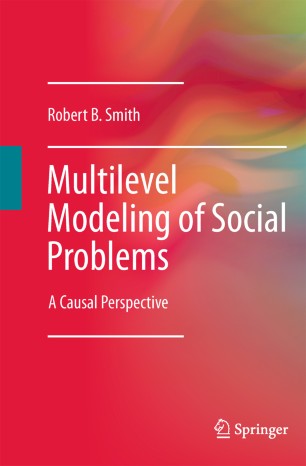 Uniquely focusing on intersections of social problems, multilevel statistical modeling, and causality, the substantively and methodologically integrated chapters of this book clarify basic strategies for developing and testing multilevel linear models (MLMs), and drawing casual inferences from such models. These models are also referred to as hierarchical linear models (HLMs) or mixed models. The statistical modeling of multilevel data structures enables researchers to combine contextual and longitudinal analyses appropriately. But researchers working on social problems seldom apply these methods, even though the topics they are studying and the empirical data call for their use. By applying multilevel modeling to hierarchical data structures, this book illustrates how the use of these methods can facilitate social problems research and the formulation of social policies. It gives the reader access to working data sets, computer code, and analytic techniques, while at the same time carefully discussing issues of causality in such models. This book innovatively: • Develops procedures for studying social, economic, and human development. • Uses typologies to group (i.e., classify or nest) the level of random macro-level factors. • Estimates models with Poisson, binomial, and Gaussian end points using SAS's generalized linear mixed models (GLIMMIX) procedure. • Selects appropriate covariance structures for generalized linear mixed models. • Applies difference-in-differences study designs in the multilevel modeling of intervention studies. • Calculates propensity scores by applying Firth logistic regression to Goldberger-corrected data. • Uses the Kenward-Rogers correction in mixed models of repeated measures. • Explicates differences between associational and causal analysis of multilevel models. • Consolidates research findings via meta-analysis and methodological critique. • Develops criteria for assessing a study's validity and zone of causality. Because of its social problems focus, clarity of exposition, and use of state-of-the-art procedures, policy researchers, methodologists, and applied statisticians in the social sciences (specifically, sociology, social psychology, political science, education, and public health) will find this book of great interest. It can be used as a primary text in courses on multilevel modeling or as a primer for more advanced texts.

Robert B. Smith (Ph.D. Columbia University, 1971) taught political sociology, research methods, and theory development at the University of California, Santa Barbara.  His research there focused on the social consequences of war, generalizations of path analysis, and computer simulations of social processes.  Since then, he has worked extensively in applied research.  His publications include articles on political and social processes, and on multilevel models bearing on human development.  He was the primary editor of the three volumes of the A Handbook of Social Science Methods, which link qualitative and quantitative methods, and he is the author of Cumulative Social Inquiry: Transforming Novelty into Innovation.  His recent research at the Cambridge-MIT Institute assesses student exchange programs and pedagogical experiments.  As senior statistician he worked on software for randomized trials, exact statistics, and Bayesian simulations at Cytel Inc., and is an advisory editor of Quality & Quantity.  He was a Fulbright lecturer in structural sociology at Ghent University, Belgium, and he has served as president of the Boston chapter of the American Statistical Association.  He resides in Cambridge, Massachusetts where he directs his social structural research.