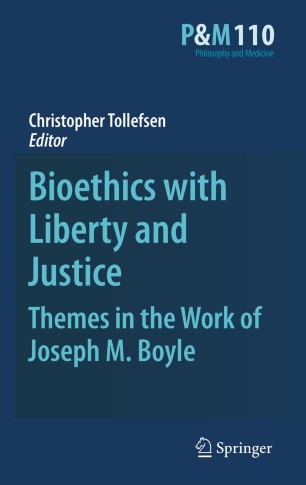 Bioethics with Liberty and Justice

Themes in the Work of Joseph M. Boyle

Part of the Philosophy and Medicine book series (PHME, volume 110)

Joseph M. Boyle Jr. has been a major contributor to the development of Catholic bioethics over the past thirty five years. Boyle’s contribution has had an impact on philosophers, theologians, and medical practitioners, and his work has in many ways come to be synonymous with analytically rigorous philosophical bioethics done in the Catholic intellectual tradition. Four main themes stand out as central to Boyle’s contribution: • the sanctity of life and bioethics: Boyle has elaborated a view of the ethics of killing at odds with central tenets of the euthanasia mentality; • double effect and bioethics: Boyle is among the pre-eminent defenders of a role for double effect in medical decision making and morality; • the right to health care: Boyle has moved beyond the rhetoric of social justice to provide a natural law grounding for a political right to health care; and • the role of natural law and the natural law tradition in bioethics: Boyle’s arguments have been grounded in a particularly fruitful approach to natural law ethics, the so-called New Natural Law theory. The contributors to BIOETHICS WITH LIBERTY AND JUSTICE: THEMES IN THE WORK OF JOSEPH M. BOYLE discuss, criticize, and in many cases extend the Boyle’s advances in these areas with rigor and sophistication. It will be of interest to Catholic and philosophical bioethicists alike.