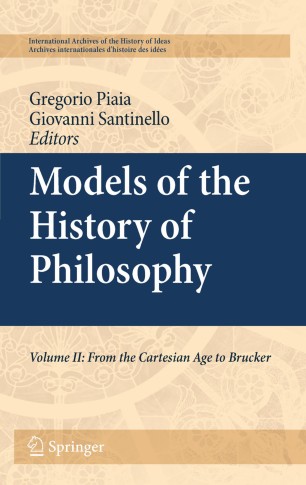 Published in English for the first time, this is the updated version of Dall’età cartesiana a Brucker, the second part of the monumental multi-volume Storia delle storie generali della filosofia. The translation of the first volume, edited by C.W.T. Blackwell and Ph. Weller and published by Kluwer in 1993, covered the development of philosophical historiography from its origins in the Renaissance to the birth of the general history of philosophy as a genre in its own right. The present volume guides the reader from the historiographical effects of the Cartesian rejection of ‘philosophical past’ up to the establishment of a ‘critical’ or ‘philosophical’ history of philosophy. In the space of one hundred years, from the mid-17th to the mid-18th century, a momentous theoretical and methodological shift occurred, marking the transition from an ‘erudite’ historiography to new ‘systematic’ styles embodied by authors like Bayle, Boureau-Deslandes, Brucker, Heumann. The numerous works on the history of philosophy published during this century vastly contributed to the culture of the Enlightenment, creating a representation of the past distinctive to this crucial period of European intellectual history.

The volume offers a detailed examination of 36 works, either general histories of philosophy, or texts—such as Bayle’s Dictionnaire—which have strongly influenced the development of the genre, and is valuable for intellectual history, philosophy and the history of philosophy, the history of literature and the history of religion. It can be used both for undergraduate courses (for specific reading assignments) and as background material for graduate courses. The bibliography provides important aids to many topics which were previously difficult to access.