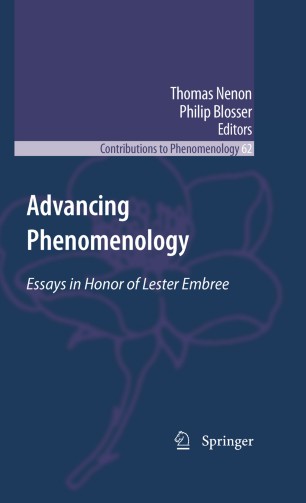 Essays in Honor of Lester Embree

Part of the Contributions To Phenomenology book series (CTPH, volume 62)

The title Advancing Phenomenology is purposely ambiguous. On the one hand, these essays document the progress that phenomenology as an ongoing and vibrant movement has made in the period of about a century since its inception. They illustrate the advance of phenomenology both in terms of the range of topics represented in this volume and in terms of the disciplinary and geographical diversity of the scholars who have contributed to it. The topics range from scholarly appropriations of past achievements in phenomenology, to concrete phenomenological investigations into ethics and environmental philosophy, as well as phenomenological reflections on the foundations of disciplines outside philosophy such as psychology, history, the social sciences, and archeology.

The interdisciplinary aspect is guaranteed by contributors coming both from philosophy departments and from a number disciplines outside of philosophy such as sociology, psychology, and archeology; and they come from all around the world – from North America, from Western and Eastern Europe, from Latin America, and from several different countries in Asia. Together, these essays testify to the breadth and geographical reach of phenomenology at the beginning of the 20th Century.

The papers in this volume provide good evidence of the seriousness and fruitfulness of current research in phenomenology today.