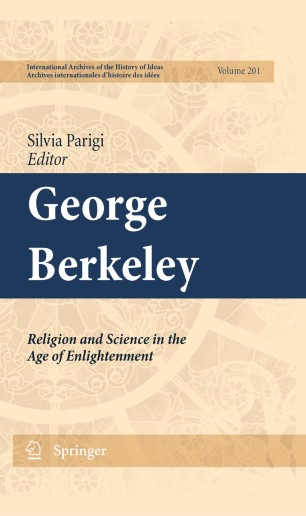 George Berkeley: Religion and Science in the Age of Enlightenment

George Berkeley was considered "the most engaging and useful man in Ireland in the eighteenth century". This hyperbolic statement refers both to Berkeley’s life and thought; in fact, he always considered himself a pioneer called to think and do new things. He was an empiricist well versed in the sciences, an amateur of the mechanical arts, as well as a metaphysician; he was the author of many completely different discoveries, as well as a very active Christian, a zealous bishop and the apostle of the Bermuda project. The essays collected in this volume, written by some leading scholars, aim to reconstruct the complexity of Berkeley’s figure, without selecting "major" works, nor searching for "coherence" at any cost. They will focus on different aspects of Berkeley’s thought, showing their intersections; they will explore the important contributions he gave to various scientific disciplines, as well as to the eighteenth-century philosophical and theological debate. They will highlight the wide influence that his presently most neglected or puzzling books had at the time; they will refuse any anachronistical trial of Berkeley’s thought, judged from a contemporary point of view.