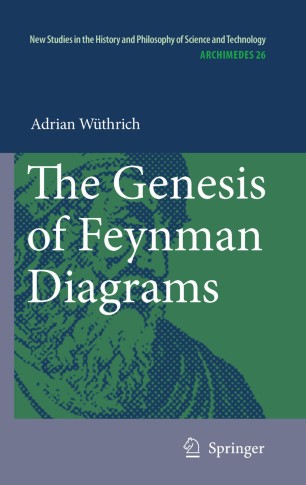 The Genesis of Feynman Diagrams

In a detailed reconstruction of the genesis of Feynman diagrams the author reveals that their development was constantly driven by the attempt to resolve fundamental problems concerning the uninterpretable infinities that arose in quantum as well as classical theories of electrodynamic phenomena. Accordingly, as a comparison with the graphical representations that were in use before Feynman diagrams shows, the resulting theory of quantum electrodynamics, featuring Feynman diagrams, differed significantly from earlier versions of the theory in the way in which the relevant phenomena were conceptualized and modelled. The author traces the development of Feynman diagrams from Feynman's "struggle with the Dirac equation" in unpublished manuscripts to the two of Freeman Dyson's publications which put Feynman diagrams into a field theoretic context. The author brings to the fore that Feynman and Dyson not only created a powerful computational device but, above all, a new conceptual framework in which the uninterpretable infinities that had arisen in the old form of the theory could be precisely identified and subsequently removed in a justifiable manner.

Wuethrich delves into the creative thinking of Richard Feynman and takes the reader on an exciting tour that leads from the early, groping attempts to understand quantum electrodynamics using inadequate graphical representations to the powerful diagrams that bear Feynman's name. Guided by Wuethrich's reconstruction of this path, we develop a deeper understanding of why the Feynman diagrams are what they are: they mediate and represent a deep conceptual change that was brought about by modern QED. Wuethrich's approach to a better understanding of the core concepts of QED by focussing on the emergence of its key representational tool is a masterful combination of historical reconstruction and conceptual analysis.Tilman Sauer, Einstein Papers Project, California Institute of Technology, Pasadena, CA,

“With the five central chapters aimed at proving that there is more to Feynman diagrams than meets the eye … the two framing chapters give a non-technical overview and summary, and are thus the most interesting to a general reader with no desire to engage with the mathematical formalism. … Anybody interested … will benefit greatly from this thorough analysis not just of the genesis of but also of the conceptual transformation wrought by Feynman diagrams.” (Alexander Blum, Philosophy in Review, Vol. XXXII (1), 2012)

“The topic of this book is how diagrammatic techniques (now known as Feynman diagrams) emerged in the work of R. P. Feynman in the post-war years 1945-1950. … this book is of interest for readers working in the domain of history of science and specialising in the historical development of quantum field theory.” (Stefan Weinzierl, Mathematical Reviews, Issue 2012 j)

“The aim of this book is to reconstruct the route that led Feynman, between approximately 1946 and 1948, to devise his new methods of diagrams and to evaluate what was achieved. … The book is highly readable for physicists as well as for philosophers of physics and physics-oriented mathematicians.” (Hirokazu Nishimura, Zentralblatt MATH, Vol. 1226, 2012)

“Richard Feynman developed the ‘diagrams’ of Adrian Wüthrich’s title during the years 1947–1948. … The book’s first chapter is a review of various interpretations of the diagrams. … This book is an interesting and worthwhile contribution to the history of Feynman’s seminal contributions to QED.” (Laurie M. Brown, Metascience, Vol. 21, 2012)