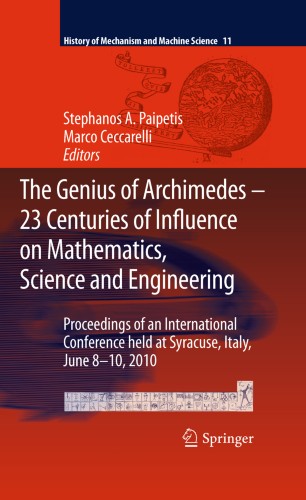 The Genius of Archimedes -- 23 Centuries of Influence on Mathematics, Science and Engineering

Proceedings of an International Conference held at Syracuse, Italy, June 8-10, 2010

Part of the History of Mechanism and Machine Science book series (HMMS, volume 11)

Archimedes is held in high esteem by mathematicians, physicists and engineers as one of the most brilliant scientists of all time. These proceedings contain original, unpublished papers with the primary emphasis on the scientific work of Archimedes and his influence on the fields of mathematics, science, and engineering. There are also papers dealing with archaeological aspects and the myths and legends about Archimedes and about the Archimedes Palimpsest. Papers on the following subjects form part of the book: Hydrostatics (buoyancy, fluid pressure and density, stability of floating bodies); Mechanics (levers, pulleys, centers of gravity, laws of equilibrium); Pycnometry (measurement of volume and density); Integral Calculus (Archimedes as the father of the integral calculus, method of exhaustion, approximation of pi, determination of areas and volumes); Mathematical Physics (Archimedes as the father of mathematical physics, Law of the Lever, Law of Buoyancy, Axiomatization of Physics); History of Mathematics and Mechanics (Archimedes’ influence in antiquity, the middle ages, the Renaissance, and modern times; his influence on Leonado da Vinci, Galileo, Newton, and other giants of science and mathematics); Ancient Machines and Mechanisms (catapults, water screws, iron hands, compound pulleys, planetaria, water clocks, celestial globes, the Antikythera Mechanism); Archimedean Solids (their rediscovery in the Rennaisance and their applications in materials science and chemistry); Archimedean Legends (how stories of golden crowns, eureka moments, naked runs, burning mirrors, steam cannons, etc., have influenced us through the ages, whether true or not); The Cattle Problem (how its 18th century rediscovery inspired the study of equations with integer solutions); Teaching the Ideas of Archimedes (how his life and works have influenced the teaching of science, mathematics, and engineering).