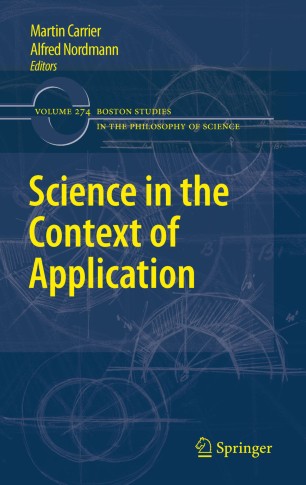 Science in the Context of Application

Part of the Boston Studies in the Philosophy of Science book series (BSPS, volume 274)

We increasingly view the world around us as a product of science and technology. Accordingly, we have begun to appreciate that science does not take its problems only from nature and then produces technological applications, but that the very problems of scientific research themselves are generated by science and technology. Simultaneously, problems like global warming, the toxicology of nanoparticles, or the use of renewable energies are constituted by many factors that interact with great complexity. Science in the context of application is challenged to gain new understanding and control of such complexity—it cannot seek shelter in the ivory tower or simply pursue its internal quest for understanding and gradual improvement of grand theories. Science in the Context of Application will identify, explore and assess these changes. Part I considers the "Changing Conditions of Scientific Research" and part II "Science, Values, and Society". Examples are drawn from pharmaceutical research, the information sciences, simulation modelling, nanotechnology, cancer research, the effects of commercialization, and many other fields. The book assembles papers from well-known European and American Science Studies scholars like Bernadette Bensaude-Vincent, Janet Kourany, Michael Mahoney, Margaret Morrison, Hans-Jörg Rheinberger, Arie Rip, Dan Sarewitz, Peter Weingart, and others. The individual chapters are written to address anyone who is concerned about the role of contemporary science in society, including scientists, philosophers, and policy makers.