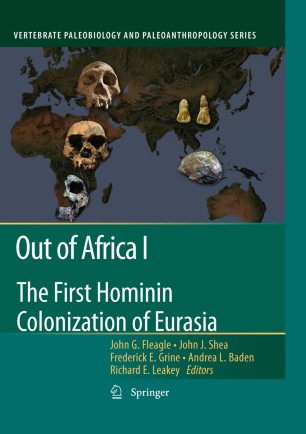 Out of Africa I

The First Hominin Colonization of Eurasia

For the first two thirds of our evolutionary history, we hominins were restricted to Africa. Dating from about two million years ago, hominin fossils first appear in Eurasia. This volume addresses many of the issues surrounding this initial hominin intercontinental dispersal. Why did hominins first leave Africa in the early Pleistocene and not earlier? What do we know about the adaptations of the hominins that dispersed - their diet, locomotor abilities, cultural abilities? Was there a single dispersal event or several? Was the hominin dispersal part of a broader faunal expansion of African mammals northward? What route or routes did dispersing populations take?

John Fleagle is Distinguished Professor of Anatomical Sciences at Stony Brook University. He has conducted paleontological field work in many parts of the world, including Argentina, Egypt, Kenya, Ethiopia, and India. He is the author of the textbook Primate Adaptation and Evolution (1988, 1999, Elsevier), Co-Editor of the Human Evolution Sourcebook (1993, 2006, Prentice Hall) and the Editor of journal Evolutionary Anthropology.