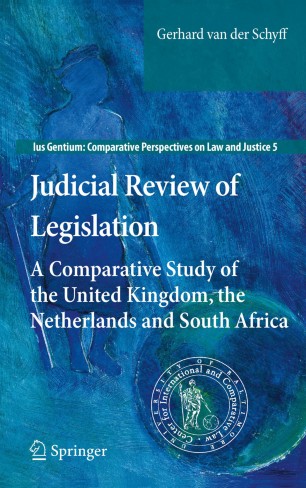 A Comparative Study of the United Kingdom, the Netherlands and South Africa

Constitutionalism is the permanent quest to control state power, of which the judicial review of legislation is a prime example. Although the judicial review of legislation is increasingly common in modern societies, it is not a finished project. This device still raises questions as to whether judicial review is justified, and how it may be structured. Yet, judicial review’s justification and its scope are seldom addressed in the same study, thereby making for an inconvenient divorce of these two related avenues of study. To narrow the divide, the object of this work is quite straightforward. Namely, is the idea of judicial review defensible, and what influences its design and scope? This book addresses these matters by comparing the judicial review of legislation in the United Kingdom (the Human Rights Act of 1998), the Netherlands (the Halsema Proposal of 2002) and the Constitution of South Africa of 1996. These systems present valuable material to study the issues raised by judicial review. The Netherlands is of particular interest as its Constitution still prohibits the constitutional review of acts of parliament, while allowing treaty review of such acts. The Halsema Proposal wants to even out this difference by allowing the courts also to apply constitutional norms to legislation and not only to international norms. The Human Rights Act and the South African Constitution also present interesting questions that will make their study worthwhile. One can think of the issue of dialogue between the legislature and the judiciary. This topic enjoys increased attention in the United Kingdom but is somewhat underexplored in South African thought on judicial review. These and similar issues are studied in each of the three systems, to not only gain a better understanding of the systems as such, but also of judicial review in general.