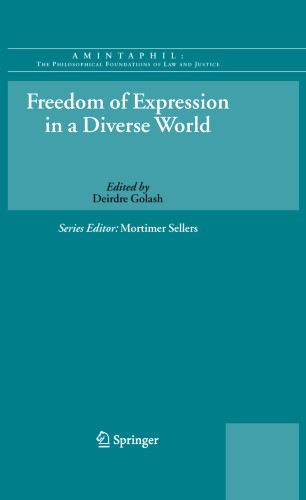 Freedom of Expression in a Diverse World

Part of the AMINTAPHIL: The Philosophical Foundations of Law and Justice book series (AMIN, volume 3)

The debate over the foundations and boundaries of freedom of speech, once a matter of balancing the individual rights of unpopular speakers against broader social interests, took on a new shape in the 1980s when feminists began to advocate restrictions on pornography and critical race theorists to advocate restriction of certain kinds of hate speech. These challenges to traditional liberalism brought into sharp focus the issues of why we value free speech and how much weight it should be given against competing values. Difficult as it is to resolve these issues domestically, we now face new challenges arising from the increasingly rapid dissemination of information across international borders in an atmosphere of considerable political tension. The riots in response to the publication of Danish cartoons ridiculing Mohammed and the death threats against Salman Rushdie indicate how dramatically the stakes have been raised. At the same time, there is increased concern over discriminatory treatment of sexual minorities, Muslims, and immigrants. Against this background, the essays in this volume seek to illuminate why we value freedom of speech and expression and how this freedom can be weighed against other values, such as multicultural sensitivity, the rights of racial and sexual minorities, and the prevention of violence, both domestically and internationally.