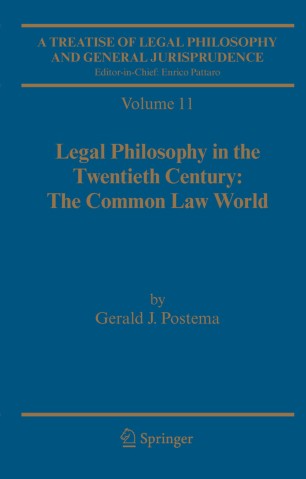 A Treatise of Legal Philosophy and General Jurisprudence

Volume 11, the sixth of the historical volumes of A Treatise of Legal Philosophy and General Jurisprudence, offers a fresh, philosophically engaged, critical interpretation of the main currents of jurisprudential thought in the English-speaking world of the 20th century. It tells the tale of two lectures and their legacies: Oliver Wendell Holmes, Jr.’s “The Path of Law” (1897) and H.L.A. Hart’s Holmes Lecture, “Positivism and the Separation of Law and Morals” (1958). Holmes’s radical challenge to late 19th century legal science gave birth to a rich variety of competing approaches to understanding law and legal reasoning from realism to economic jurisprudence to legal pragmatism, from recovery of key elements of common law jurisprudence and rule of law doctrine in the work of Llewellyn, Fuller and Hayek to root-and-branch attacks on the ideology of law by the Critical Legal Studies and Feminist movements. Hart, simultaneously building upon and transforming the undations of Austinian analytic jurisprudence laid in the early 20th century, introduced rigorous philosophical method to English-speaking jurisprudence and offered a reinterpretation of legal positivism which set the agenda for analytic legal philosophy to the end of the century and beyond. A wide-ranging debate over the role of moral principles in legal reasoning, sparked by Dworkin’s fundamental challenge to Hart’s theory, generated competing interpretations of and fundamental challenges to core doctrines of Hart’s positivism, including the nature and role of conventions at the foundations of law and the methodology of philosophical jurisprudence.

Gerald J. Postema has published extensively in legal and political philosophy and ethics. In 2011 he published Legal Philosophy in the 20th Century: The Common Law World, He wrote Bentham and the Common Law Tradition (Clarendon 1986/1989) and edited Racism and the Law (Kluwer 1997); Rationality, Conventions, and the Law (Kluwer 1998); Jeremy Bentham: Moral, Political, and Legal Philosophy (Ashgate 2002) and Philosophy and the Law of Torts (CUP 2001). He is associate editor of the 12 volume, Treatise in the Philosophy of Law (Springer 2005, 2007, 2009, 2011).
A selection of the jurisprudential writings of Sir Matthew Hale will also be published by Oxford University Press under his editorship. Former Guggenheim and Rockefeller fellow, and fellow of the Netherlands Institute for Advanced Studies and the National Humanities Center, he was editor of Cambridge Studies in Philosophy and Law (1995-2006) and was special issues editor of Law and Philosophy (1996-2001). In fall, 2012, he was awarded the George J. Johnson Prize for Distinguished Achievement in the Art and Humanities, University of North Carolina at Chapel Hill.

“Gerald Postema surveys developments in the twentieth century.  ... Every thinking lawyer should be informed and stimulated by these books, and as for the iurisperiti, any unthinking lawyers should acquire them in order to stimulate thought.” (Andrew Halpin, Singapore Journal of Legal Studies, September, 2017)

“The volume is a magisterial achievement, and should serve as a valuable resource for specialists and non-specialists alike for years to come. … the chapters are helpfully written as mostly self-standing expositions of a manageable number of theorists and arguments; the result is that the chapters and subsections are useful essays in their own right, for both research and pedagogical purposes.” (Michael Sevel, Notre Dame Philosophical Reviews, ndpr.nd.edu, April, 2015)

“A book for sophisticated students of legal theory where one learns more and better what the best 20th century jurisprudential works contained and what they should have said or failed in saying. … Legal Philosophy in the Twentieth Century: The Common Law World is a brilliant book and, for the rest of us incapable of achieving anything like this … it is simply breathtaking.” (Richard Bronaugh, Canadian Journal of Law and Jurisprudence, Vol. 27 (2), July, 2014)