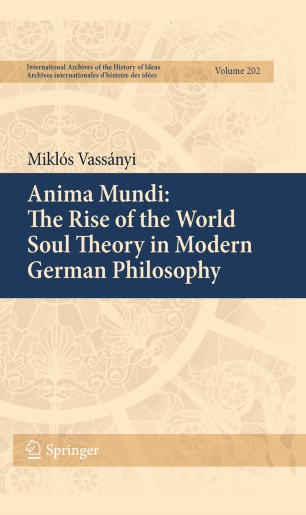 Anima Mundi: The Rise of the World Soul Theory in Modern German Philosophy

First affirmed by Plato, the concept of the world as a cosmic living being, possessed of a soul, gained great importance in the Stoic and Neo-Platonic philosophical schools. Several medieval philosophers displayed an interest in this theory of the world soul, which retained its attractive power even into the Renaissance. However, the leading early modern rationalists, especially Leibniz, found the world soul philosophically unacceptable. Why and how then did the German Romantics of the late 1700s and early 1800s – first and foremost Franz von Baader and Schelling – come resolutely to posit the existence of the world soul? In Anima Mundi: The Rise of the World Soul Theory in Modern German Philosophy , Miklós Vassányi shows that the metaphysical aspirations of the early German Romantics could not be satisfied by the Leibnizian concept of a God beyond the world. Powerful as Leibniz’s argument is when primarily the existence of God is considered, it fails to convincingly account for the presence of God within the world, and for the unity of the world. The fundamental existential experience of the Romantics was that God is immediately present in Nature, that God and Nature constitute an indissoluble Absolute. The best philosophical instrument to articulate their theory of the interpenetration of the Finite and the Infinite was a theory of the soul of the world.