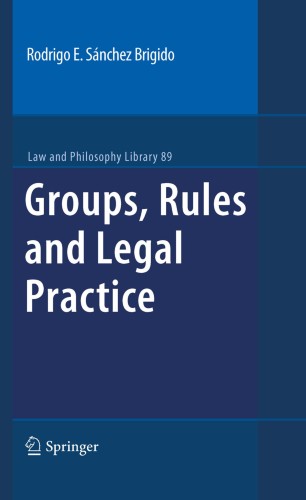 Ever since Hart´s The Concept of Law, legal philosophers agree that the practice of law-applying officials is a fundamental aspect of law. Yet there is a huge disagreement on the nature of this practice. Is it a conventional practice? Is it like the practice that takes place, more generally, when there is a social rule in a group? Does it share the nature of collective intentional action? The book explores the main responses to these questions, and claims that they fail on two main counts: current theories do not explain officials´ beliefs that they are under a duty qua members of an institution, and they do not explain officials´ disagreement about the content of these institutional duties. Based on a particular theory of collective action, the author elaborates then an account of certain institutions, and claims that the practice is an institutional practice of sorts. This would explain officials´ beliefs in institutional duties, and officials´ disagreement about those duties. The book should be of interest to legal philosophers, but also to those concerned with group and social action theories and, more generally, with the nature of institutions.