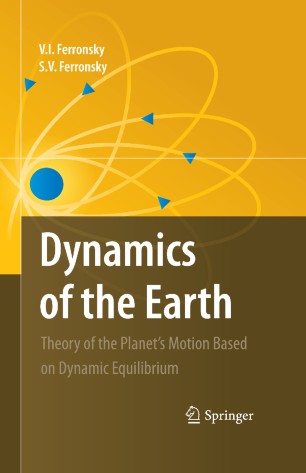 Dynamics of the Earth

Theory of the Planet's Motion Based on Dynamic Equilibrium

In their search for solutions to problems concerning the dynamics of the Earth as a self-gravitating body, the authors have applied the fundamentals found in their book “Jacobi Dynamics” (1987, Reidel). First, satellite observations have shown that the Earth does not remain in hydrostatic equilibrium, which forms the physical basis of modern geodynamics. Secondly, satellite data have established a relationship between the planet’s polar moment of inertia and the potential of the Earth’s outer force field, which proves the most basic point of Jacobi dynamics. This allowed the authors to revise their derivation of the classical virial theorem, introducing the concept of a volumetric force and volumetric moment, and so to obtain a generalized virial theorem in the form of Jacobi’s equation.
The main dynamical effects are: the kinetic energy of oscillation of the interacting particles, which explains the physical meaning and nature of gravitational forces; separation of shells of a self-gravitating body with respect to its mass density; differences in angular velocities of the shell’s rotation; continuity in variance of the potential of the outer gravitational force field, together with reductions in the envelope of the interacting masses (volumetric center of gravity); the nature of Earth, Moon and satellite precession; the nature and generating mechanism of the planet’s electromagnetic field; the common nature of gravitational and electromagnetic energy, and other related issues.

The work is a logical continuation of the book "Jacobi Dynamics" and is intended for researchers, teachers and students engaged in theoretical and experimental research in various branches of astronomy, geophysics, planetology and cosmogony, and for students of celestial, statistical, quantum and relativistic mechanics and hydrodynamics.