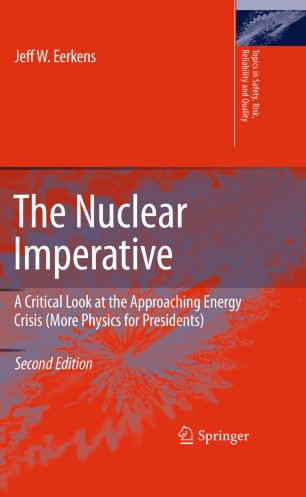 In this well documented global wake-up call, nuclear physicist Jeff Eerkens explores remedies for the impending energy crisis, when oil and natural gas are depleted. Because burning coal worsens the problem of global warming, alternate energy sources must be instituted. The Nuclear Imperative demonstrates with scientific documentation that solar, wind, and biomass power alone, while helpful, are incapable of supplying and sustaining the enormous quantities of electricity and heat needed for manufacturing portable synthetic fuels (synfuels) to replace our current use of fossil fuels. Instead, it offers a fresh look at uranium-produced energy as the optimal affordable solution.

Long misunderstood and irrationally feared because of antiquated beliefs by the general public, modern nuclear power generation is safer, cleaner, and essential for solving the future energy shortfall. Using a detailed, scientific approach to dispel common myths, The Nuclear Imperative shows that uranium fission power is available for 1,500 years as a prime energy source to provide all the world’s energy needs. Because it takes ten to twenty years to design, test, and build new synfuel-producing reactors and new engines powered by new synfuels, action must be taken soon to prevent a catastrophy thirty years from now when oil runs out.

This is the second, corrected and revised edition of this work.