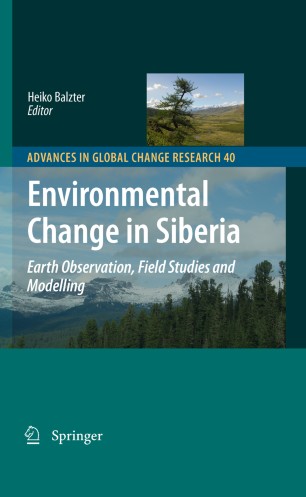 This book covers a round-up of environmental changes in Siberia with a focus on the terrestrial biosphere but also discussing climate and atmosphere and the hydrological cycle. It concludes with a discussion of information system approaches that are being developed to safeguard and make accessible spatial and temporal data for environmental studies.

Siberia is undergoing rapid transformations as a result of its climate vulnerability and the exceptionally high rate of warming it has undergone in recent decades. The information presented in this book was not easily accessible to the global change community before. Contributors include a wide range of Russian, European and North American authors from a variety of disciplinary backgrounds including field ecology, satellite remote sensing and modelling.

The book investigates disturbance processes in the taiga forest with a focus on fire and logging, provides observational evidence of evergreen conifer invasion into larch dominated zones which could be a sign of climate change, and describes vegetation model predictions of shifting vegetation zones. Satellite observations of snow cover in Siberia are presented, and observed changes in river runoff described. The interactions between the hydrological cycle, the biosphere and the atmosphere are looked at from a variety of disciplinary viewpoints.

Professor Balzter Heiko Balzter is Professor in Physical Geography and Head of the Geography Department at the University of Leicester in the United Kingdom. His research interests include biosphere / climate interactions and their responses to environmental change, with a focus on remote sensing and modelling approaches. From 1998 to 2006 he worked at the Centre for Ecology and Hydrology at Monks Wood, UK, where he was leading the Section for Earth Observation for three years. Professor Balzter has contributed to many major international and interdisciplinary research projects (supported by the European Commission, European Space Agency and British funding sources), including SIBERIA, SIBERIA-2, SIBFORD, GEOLAND and GEOLAND2. His academic background is in Agricultural and Environmental Sciences, and he received his Dipl.-Ing. agr. degree in 1994 with a dissertation topic on methods for vegetation sampling, and his Dr. agr. in 1998 from Justus-Liebig-University in Giessen, Germany, for a thesis on vegetation modelling using Markov Chains and Cellular Automata.