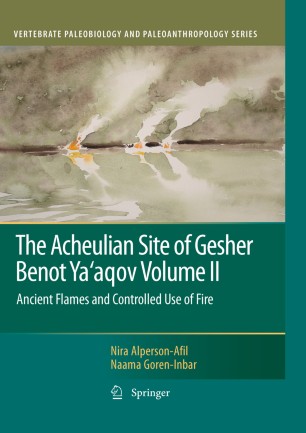 Ancient Flames and Controlled Use of Fire

The manipulation of fire by early hominins was a turning point in our evolutionary history. Once "domesticated", fire provided warmth, light and protection from predators, as well as enabling the exploitation of a new range of foods. This book presents the spatial analyses of burned and unburned flint items which provide evidence for the controlled use of fire at the 790,000-year-old Acheulian site of Gesher Benot Ya‘aqov (GBY). Clusters of burned flint, interpreted as the remnants of hearths, occur throughout the entire occupational sequence of the site. The fact that fire is repetitively used suggests that the knowledge of fire-making and the technological skills of the Acheulian hominins of Gesher Benot Ya‘aqov enabled them to set fire at will in diverse environmental settings.

"Control of fire marks a significant landmark in human evolution, providing warmth, protection, and many new foods. This important volume compellingly shows that fire was already in regular use some 800,000 years ago." John D. Speth, Museum of Anthropology, University of Michigan, Ann Arbor, USA

"A major contribution to knowledge of early human fire history, the finds at Gesher Benot Ya‘aqov add immensely to the picture of our early ancestors by the fireside. The authors present a painstaking and multidimensional scientific investigation which should convince even sceptics of the importance of fire use in prehistory" John A.J. Gowlett, British Academy Centenary Research Project, The Archaeology of the Social Brain, UK

Nira Alperson-Afil and Naama Goren-Inbar both teach prehistoric archaeology at the Institute of Archaeology of the Hebrew University of Jerusalem. Their main research interest is the prehistory of the Levant, including technological, cultural, and behavioral aspects of our ancient ancestors.