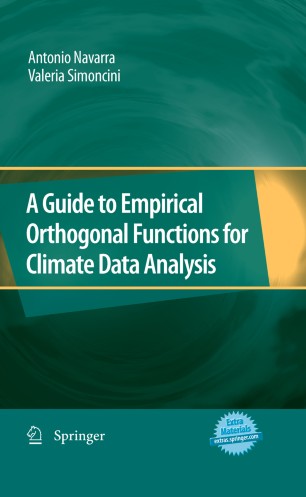 A Guide to Empirical Orthogonal Functions for Climate Data Analysis

Climatology and meteorology have basically been a descriptive science until it became possible to use numerical models, but it is crucial to the success of the strategy that the model must be a good representation of the real climate system of the Earth. Models are required to reproduce not only the mean properties of climate, but also its variability and the strong spatial relations between climate variability in geographically diverse regions. Quantitative techniques were developed to explore the climate variability and its relations between different geographical locations. Methods were borrowed from descriptive statistics, where they were developed to analyze variance of related observations-variable pairs, or to identify unknown relations between variables.

A Guide to Empirical Orthogonal Functions for Climate Data Analysis uses a different approach, trying to introduce the reader to a practical application of the methods, including data sets from climate simulations and MATLAB codes for the algorithms. All pictures and examples used in the book may be reproduced by using the data sets and the routines available in the book .

Though the main thrust of the book is for climatological examples, the treatment is sufficiently general that the discussion is also useful for students and practitioners in other fields.