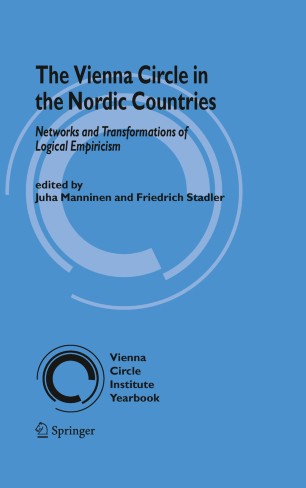 The Vienna Circle in the Nordic Countries

The rise of scientific (analytic) philosophy since the turn of the twentieth century is linked to the philosophical interaction between, on the one hand, Ernst Mach, the Vienna Circle around Moritz Schlick and Otto Neurath, the Berlin Group (Hans Reichenbach, Carl G. Hempel), and the Prague Group (Rudolf Carnap, Philipp Frank), and, on the other, philosophers and scientists in Denmark (Niels Bohr, Joergen Joergensen), Finland (Eino Kaila, Georg Henrik von Wright and their disciples), Norway (Arne Næss and his students), and Sweden (Åke Petzäll, the journal Theoria and a younger generation of philosophers in Uppsala). In addition, the pure theory of law of Hans Kelsen achieved wide dissemination in the Nordic countries (through, for example, Alf Ross). One of the key events in the relations between the Central European philosophers and those of the Nordic countries was the Second International Congress for the Unity of Science which was arranged in Copenhagen in 1936.

Besides considering the interactions of these groups, the book also pays special attention to their interactions, in the context of the Cold War period following the Second World War, with the so-called Third Vienna Circle and with the Forum Alpbach/Austrian College around Viktor Kraft and Bela Juhos (along with Ludwig Wittgenstein and Paul Feyerabend), where the issues of (philosophical and scientific) realism and "psychologism"—the relationship between psychology and philosophy—were matters of controversy.

By comparison with the more extensively investigated and better known transatlantic transfer and transformation of "positivism" and logical empiricism, the developments outlined above remain

neglected and marginalized topics in historiography. The symposium aims to reveal the remarkable continuity of the philosophical enlightened "Nordic Connection". We intend to shed light on this forgotten communication and to reconstruct these hidden scholarly networks from an historical and logical point of view, thereby evaluating their significance for today’s research.