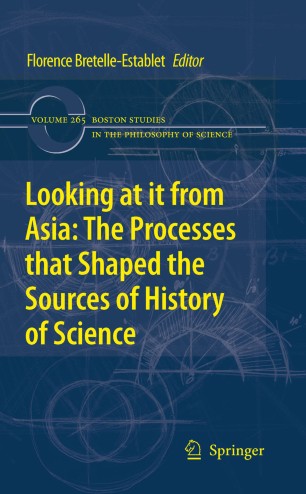 Looking at it from Asia: the Processes that Shaped the Sources of History of Science

Part of the Boston Studies in the Philosophy of Science book series (BSPS, volume 265)

The idea of this volume took shape within a group of scholars working on the history of science in Asia. Despite the great differences in time, locations and disciplines between our respective fields of research, we all faced similar situations: among the huge mass of written documents available to historians and that were eventually taken as sources in the historiography of science, some had been well studied while others had been dismissed or ignored. This observation will seem obvious to historians, whose daily work consists in shaping corpuses to raise new questions. The diagnosis has long been established that such selections related to the historians’ agenda and thereby reflected the ways in which historiography somehow belonged to its time. Yet, it appeared to us that this diagnosis was insufficient and that the selective consideration of source material was also at least partly related to mechanisms of selection that occurred upstream from the historian’s classical work of shaping a corpus. Therefore, we came to the idea that, in order to write, or to rewrite, chapters in the history of science, historians may benefit from relying on a critical analysis of the factors that, along history, shaped the documents that have become their sources or the collections from which they constitute their corpuses. It is to the development of such a branch of critical analysis in the history of science, to its methods and to its benefits —to be illustrated in carefully chosen case studies—, that we suggest to devote a collective research and a book. We want to inquire into how the corpuses we form incorporate long sequences of selections and reorganizations that took place in history and that must be brought to light if we do not want various types of actors of the past to carve their choices and conceptions into our questions and conclusions.