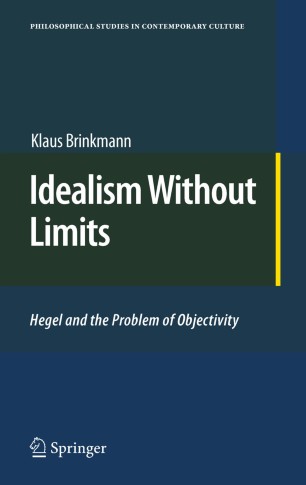 Hegel and the Problem of Objectivity

In this study of Hegel's philosophy, Brinkmann undertakes to defend Hegel's claim to objective knowledge by bringing out the transcendental strategy underlying Hegel's argument in the Phenomenology of Spirit and the Logic. Hegel's metaphysical commitments are shown to become moot through this transcendental reading. Starting with a survey of current debates about the possibility of objective knowledge, the book next turns to the original formulation of the transcendental argument in favor of a priori knowledge in Kant's First Critique. Through a close reading of Kant's Transcendental Deduction and Hegel's critique of it, Brinkmann tries to show that Hegel develops an immanent critique of Kant's position that informs his reformulation of the transcendental project in the Introduction to the Phenomenology of Spirit and the formulation of the position of 'objective thought' in the Science of Logic and the Encyclopedia of the Philosophical Sciences. Brinkmann takes the reader through the strategic junctures of the argument of the Phenomenology that establishes the position of objective thinking with which the Logic begins. A critical examination of the Introduction to the Lectures on the History of Philosophy shows that Hegel's metaphysical doctrine of the self-externalization of spirit need not compromise the ontological project of the Logic and thus does not burden the position of objective thought with pre-critical metaphysical claims.

Brinkmann's book is a remarkable achievement. He has given us what may be the definitive version of the transcendental, categorial interpretation of Hegel. He does this in a clear approachable style punctuated with a dry wit, and he fearlessly takes on the arguments and texts that are the most problematic for this interpretation. Throughout the book, he situates Hegel firmly in his own context and that of contemporary discussion." -Terry P. Pinkard, University Professor, Georgetown University, Washington, D.C, USA "Klaus Brinkmann’s important Hegel study reads the Phenomenology and the Logic as aspects of a single sustained effort, in turning from categories to concepts, to carry Kant’s Copernican turn beyond the critical philosophy in what constitutes a major challenge to contemporary Cartesianism." - Tom Rockmore, McAnulty College Distinguished Professor, Duquesne University, Pittsburgh, Pennsylvania, USA "In this compelling reconstruction of the theme of objective thought, Klaus Brinkmann takes the reader through Hegel’s dialectic with exceptional philosophical acumen.... Many aspects of this book are striking: the complete mastery of the central tenets of Kant’s and Hegel’s philosophy, the admirable clarity in treating obscure texts and very difficult problems, and how Brinkmann uses his expertise for a discussion of the problems of truth, objectivity and normativity relevant to the contemporary philosophical debate. This will prove to be a very important book, one that every serious student of Kant and Hegel will have to read." - Alfredo Ferrarin, Professor, Department of Philosophy, University of Pisa, Pisa, Italy