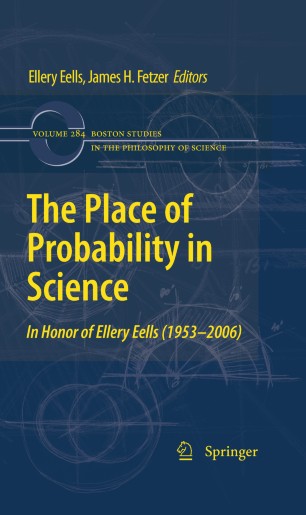 The Place of Probability in Science

Part of the Boston Studies in the Philosophy of Science book series (BSPS, volume 284)

Science aims at the discovery of general principles of special kinds that are applicable for the explanation and prediction of the phenomena of the world in the form of theories and laws. When the phenomena themselves happen to be general, the principlesinvolved assume the form of theories; and when they are p- ticular, they assume the form of general laws. Theories themselves are sets of laws and de nitions that apply to a common domain, which makes laws indispensable to science. Understanding science thus depends upon understanding the nature of theories and laws, the logical structure of explanations and predictions based upon them, and the principles of inference and decision that apply to theories and laws. Laws and theories can differ in their form as well as in their content. The laws of quantum mechanics are indeterministic (or probabilistic), for example, while those of classical mechanics are deterministic (or universal) instead. The history of science re ects an increasing role for probabilities as properties of the world but also as measures of evidential support and as degrees of subjective belief. Our purpose is to clarify and illuminate the place of probability in science.