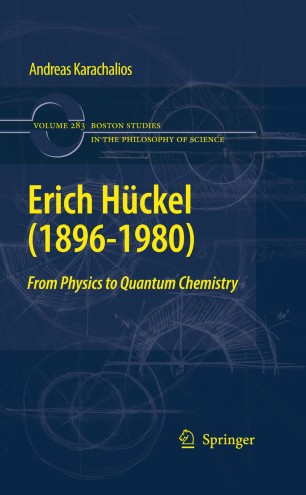 From Physics to Quantum Chemistry

Part of the Boston Studies in the Philosophy of Science book series (BSPS, volume 283)

This study, the first comprehensive account of Erich Hückel's career, examines his scientific work as well as his importance for the emergence of quantum chemistry as an independent discipline in Germany during the 1930s. Hückel began his career by studying quantum physics in Göttingen, but his background in chemistry led him to take up pioneering research on the physics of chemical bonding.

Drawing on a variety of sources, Andreas Karachalios offers a probing account of fast-breaking developments in quantum theory that paved the way for Hückel's research. In Göttingen and later in Leipzig, Hückel interacted with leading figures not only in quantum physics and physical chemistry but also with others in nearby fields, including organic chemistry and mathematics.

During his later career in Marburg, Hückel clashed with Linus Pauling over the properties of the benzine molecule. In order to appreciate this controversy, Karachalios gives a brief account of the mathematical formalism of spin invariants, with both Hückel and Pauling used in their analyses, though with different interpretations. This serves not only to clarify their differences but also to illustrate the importance of the quantum-mechanical theory of resonance for chemistry at this time.

“Andreas Karachalios produced a well researched and meticulously documented biography of Erich Hückel … . It is readable and contains a considerable amount of theoretical chemistry that allows not only the evaluation of Hückel’s oeuvre, but informs also about the early development of quantum chemistry in the 1920s and 1930s. It is warmly recommended to all theoretical and computational chemists and to all others who are interested in the history of chemistry during the first third of the twentieth century.”­­­ (Istvan Hargittai, Structural Chemistry, Vol. 21, 2010)

“This is an important and much needed book.  I consider it a must buy for historians of quantum chemistry.  Now what we need next is an English translation of Hückle’s autobiography.  Chemical Heritage Foundation, are you listening?” Dr. E. Thomas Strom, Dept of Chemistry and Biochemistry, university of Texas Arlington, Arlington, TX 76019-0065