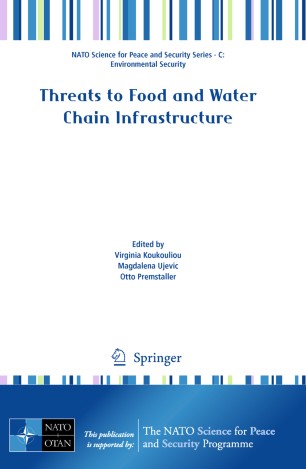 vi of a large number of people due to the enormous quantities of radioactive material that would be required to reach high levels of contamination in mass-produced or distributed supplies. Although, based on data presented at the Workshop concerning the more than 30,000 missing radioactive sources all over the word, the radioactive contamination of food or water is also a scenario that must be taken seriously into consideration. During the last two decades there have been several emerging hazards linked to animal diseases or originating in animal products for example: Avian Influenza (AI), Bovine Spongiform Encephalopathy (BSE), West Nile Fever, Severe Acute Respiratory Syndrome (SARS), and Ebola virus. All these diseases or events directly or indirectly affect food security and/or food safety. Approximately 75% of all emerging diseases are zoonotic by either an association with animal populations or an evolution of the disease in a- mals making it possible to move from animal species to humans. Participants were presented the primary results of the ongoing NATO- SPS Pilot Study on “Food Chain Security”. These results focused mainly on (i) an overview of the food system; (ii) prevention, surveillance and detection systems and (iii) response system. The importance of issues such as: vuln- ability assessments, risk communication in risk analysis, risk perception, traceability, preparedness – awareness, communication, have to be cons- ered when working on food chain security.