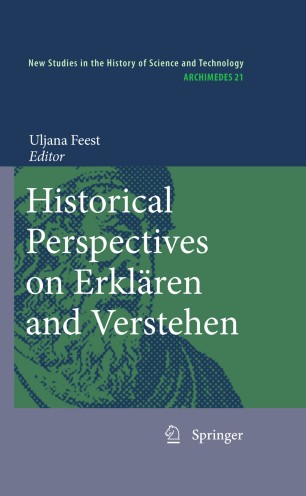 Historical Perspectives on Erklären and Verstehen

twentieth-century literature about the distinction between explanation and und- standing)? Second, can we do justice to a particular writer’s notion of that category by taking at face value what he writes about his own motivation for adopting it? In response to both types of questions, there is by now a consensus amongst many historians of science and of philosophy that (a) intellectual history – like other kinds of history – has to be careful not to uncritically adopt actors’ categories, and (b) more generally, even the actors’ own thinking about a particular issue has to be contextualized vis-à-vis their other intellectual commitments and interests, as well as the complex conditions that make the totality of their commitments possible. Such conditions include cognitive as well as practical, institutional, and cultural factors. The articles in this volume respond to these challenges in several ways. For example, one author (Christopher Pincock) seeks to read some of the nineteen- century philosophical writings about Erklären and Verstehen as standing for a more fundamental problem, which he terms the problem of the “unity of experience”.