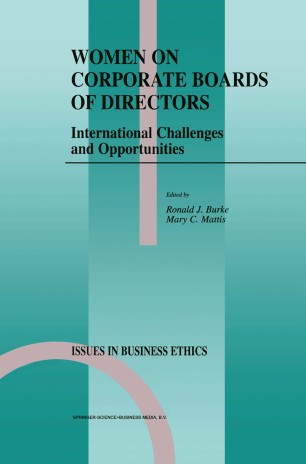 Women on Corporate Boards of Directors

Both the practitioner and academic communities have voiced strong opinions regarding the progress of women in reaching the executive suite and the corporate boardroom. Proponents on each side of the current debate offer evidence suggesting the accuracy of their respective positions. One view holds: "The fight is over. The battle is won. Women are now accepted as outside directors in the preponderance of corporate boardrooms" (Lear, 1994: 10). An alternative perspective, however, suggests there is much progress left. An illustration of the type of remaining barriers is provided by T. J. Rodgers, chief executive officer (CEO) of Cypress Semiconductor Corp. , who has commented that "a 'woman's view' on how to run our semiconductor company does not help us" (Rodgers, 1996: 14). Regardless of where one falls along the spectrum anchored at one end by the view that women have made substantial progress in reaching the upper echelons of corporations and anchored at the other end by the view that women have barely begun to penetrate the "inner sanctum" of corporations, the central issue is the extent to which women have succeeded in cracking the proverbial "glass ceiling. " The glass ceiling is a metaphorical barrier which prevents women from attaining the upper-most organizational positions (e. g. , Karr, 1991; Morrison, White, Van Velsor, and the Center for Creative Leadership, 1992; Powell & Butterfield, 1994; U. S. Department of Labor, 1991).