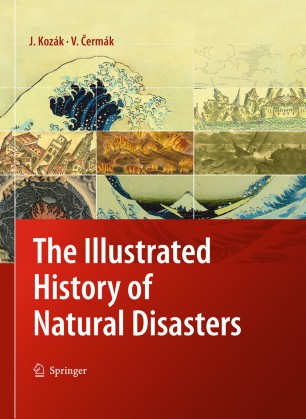 The Illustrated History of Natural Disasters

This richly illustrated pictorial history of natural disasters has been composed from a large selection of images of a wide variety of sources, mostly private collections. These include reproductions of rare engravings, maps both old and new, sketches, and diagrams. The individual full-page reproductions give historical views on natural disasters, such as earthquakes, tsunamis, volcanic eruptions, avalanches, landslides and rock falls. The illustrations are accompanied by text describing the geophysical and historical background of the disasters, the origin of each of the engravings and stories behind the events.

At the forefront of this book are the fascinating depictions of famous disasters that occurred from the 14th to the 19th centuries. These include those at Basel in 1356, Tokyo in 1650, Constantinople in 1762, as well as the eruption of Etna in 1669 and the San Francisco earthquakes of 1868 and 1909. The authors move on into the era of living memory too, covering a variety of more recent earthquakes with consequences still felt today.

The text of the book goes much further, introducing the reader to the development of the modern view on the dynamical manifestations of the Earth, its structure, and the internal forces that create the conditions for catastrophic events. This is complemented and enriched by maps together with selected larger plates illustrating the early conceptions of the Earth. Finally, the authors present a chronological record of the major milestones in the development of seismology.

This book is valuable not only as a scientific chronicle of natural disasters, but also due to its artistic, cultural and historical merits.

Both authors are senior research scientists in the Geophysical Institute of the Czech Academy of Sciences. Jan Kozák was originally engaged in laboratory seismology and later moved to historical studies in seismology and volcanology. In addition to his scientific work, he has been an ardent collector of old prints; within the last 40 years he collected one of the world largest series – over 2300 of pre-photographic depictions of earthquakes, volcanic eruptions, and tsunamis. Among his 170 publications there are over ten books of pictorial character dealing mostly with the Earth sciences, and also with historical architecture and European history.

Vladimír Cermák is an internationally recognized expert in geothermics, he has coordinated several research programs and convened a number of international symposia and workshops. He pioneered the basic heat flow studies in Europe; he is the author and co-author of several books, atlases and over 200 papers published in various international geological and geophysical journals. V. Cermák served as the Director of the Geophysical Institute of the Czech Academy of Sciences (1990-1998), was the Vice-President of the European Geophysical Society (1994-1998), and Chairman of the International Heat Flow Commission of the IASPEI (1995-1999). Currently he is a member of the Academia Europea, German Geophysical Society and American Geophysical Union. He is also the current President of the Czech National Committee of Geodesy and Geophysics.

“The Illustrated History of Natural Disasters, by geophysicists Jan Kozak and Vladimir Cermak, is a timely collection of pictorial records of earthquakes, volcanoes and tsunamis from antiquity to modern times. … This events is well documented in the book which includes stories … . helps us to understand that catastrophes are part of the history of humanity while reminding us of the vulnerability of the human species in the face of natures wrath.” (Alexis Drahos, Nature, Vol. 465, June, 2010)

“What a surprising book! … European earthquakes are the main focus of the study but volcanoes and significant tsunamis are also comprehensively discussed and illustrated … . This is a timely review of this disaster given the choice of Lisbon by the International Association for Earthquake Engineering to host the 2012 World Conference on Earthquake Engineering. … it will appeal to a wider audience those interested in the history of science and/or the conjunction of art and science.” (Kevin McCue, The Australian Geologist, March, 2011)

“The Illustrated History of Natural Disasters is based on a selection of reproductions of rare engravings from the private collection of one of the authors. … This book is likely to be of interest to historical geologists, as well as art historians interested in the geological background of the many striking works of art that have been produced … . serves as a very visual reminder to readers that these major geological events have been impacting on our society and shaping our history for centuries.” (Jan Lindsay, Bulletin of Volcanology, Vol. 73, 2011)