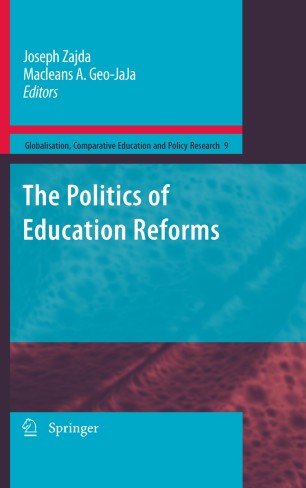 The Politics of Education Reforms

This, the ninth in the 12-volume series Globalization, Comparative Education and Policy Research, focuses on the politics at play in the arena of education reform. As with the other publications in the group, this one features scholarly research into major areas of inquiry related to education and globalisation. Here, the research is focused on key debates in the politics of education reforms. Again, this volume offers researchers, practitioners and policymakers a state-of-the-art sourcebook of the very latest thinking on the subject.

Case studies are culled from places as diverse as Russia, where education reforms have attempted the wholesale remodeling of the former Soviet-style system characterised by top-down uniformism, to the Niger Delta, where it is argued that only non market-based approaches can combat the endemic social exclusion, poverty and social inequity. Japan’s evolving universities, Israel’s self-managing schools, and English teaching in Chinese colleges also feature. In addition to the site-specific research, contributors offer a number of in-depth analyses exploring issues at the interface of education theory and political philosophy. These include an examination of the dominant paradigms employed in critiquing education reforms and a discussion of the nexus between neoliberalism and policy change in higher education, in which it is argued that the continued existence and political importance of nation states makes their universities far from neutral sites of knowledge and knowledge construction.

Globalisation and competitive market forces have generated an upsurge in the knowledge industries that is having profound differential effects on educational institutions, an analysis acknowledged by this text. As educational organisations are compelled to embrace the corporate ethos of efficiency, accountability and profit-driven managerialism, the potential is created for further polarisation and socio-economic divisions in society that may result in discontent and social conflict.