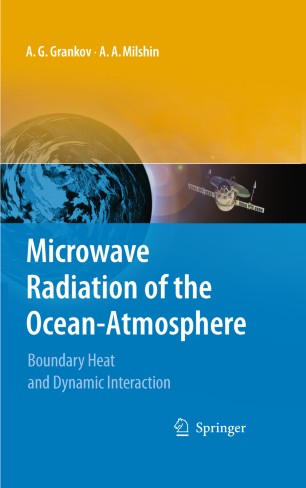 Microwave Radiation of the Ocean-Atmosphere

Aimed at scientists using satellite microwave radiometry to study remote sensing of the heat and dynamic interaction between ocean and atmosphere, this text is a fully revised and expanded edition of the authors’ 2004 monograph "Intercorrelation between Natural Microwave Radiation of the Ocean-Atmosphere System and its Boundary Heat and Dynamic Interaction", previously published only in Russian.

The book describes different approaches to the analysis of heat and dynamic processes in the ocean-atmosphere interface with satellite passive radiometric observations of microwaves. It examines the feasibility of determining synoptic, seasonal and year-to-year variations of sensible, latent heat and momentum fluxes to a useful accuracy using the DMSP SSM/I data directly from the measured brightness temperatures.

In addition, the text considers the parameters of the ocean surface and the near surface atmosphere as they relate to the processes of the ocean-atmosphere heat and dynamic interaction. These processes can be analyzed from satellites using a variety of methods, including comparison of data of synchronous satellite passive microwave radiometric and direct oceanographic and meteorological measurements, and the modeling of their variations and analysis of interrelations at different time scales. The main results have been obtained by combining data from the vessel experiments NEWFOUEX-88, ATLANTEX-90 and the data of microwave radiometric measurements from the DMSP series of meteorological satellites.

At the same time as covering a key topic area with implications for global warming research, this text will also be useful to students who want to gain insight into the application of satellite microwave radiometric methods for studying the air-sea interaction.

Alexander G. Grankov received his Ph.D at the Kotel'nikov Institute of Radio Engineering and Electronics, Russian Academy of Sciences, where he is currently a vice-head of the laboratory. He has 30 years of experience in remote sensing of oceans and land cover, intercommunication between natural microwave radiation and heat transfer in the air-surface interface. He is a member of the Popov Radioengineering Society and has participated in more than 30 national and international aerospace experiments. He is the author of over 190 scientific publications.

Alexander A. Milshin is a principal researcher at the Kotel'nikov Institute of Radio Engineering and Electronics, Russian Academy of Sciences, and the Federal State Unitary Enterprise "RPC Istok," Russia. He has 30 years of experience in remote sensing of the ocean and land cover, and in processing microwave radiometric measurement data from satellites and aircraft. He is a member of the Popov Radioengineering Society and has participated in more than 25 national and international aerospace experiments. He has authored over 170 scientific publications.