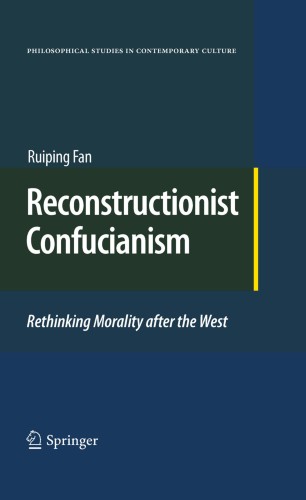 Rethinking Morality after the West

Contrasting with conventional Neo-Confucian attempts to recast the Confucian heritage in light of modern Western values, this book offers a Reconstructionist Confucian project to reclaim Confucian resources to meet contemporary moral and public policy challenges. Ruiping Fan argues that popular accounts of human goods and social justice within the dominant individualist culture of the West are too insubstantial to direct a life of virtue and a proper structure of society. Instead, he demonstrates that the moral insights of Confucian thought are precisely those needed to fill the moral vacuum developing in post-communist China and to address similar problems in the West. The book has a depth of reflection on the Confucian tradition through a comparative philosophical strategy and a breadth of contemporary issues addressed unrivaled by any other work on these topics. It is the first in English to explore not only the endeavor to revive Confucianism in contemporary China, but also brings such an endeavor to bear upon the important ethical, social, and political difficulties being faced in 21st century China. The book should be of interest to any philosopher working in application of traditional Chinese philosophy to contemporary issues as well as any reader interested in comparative cultural and ethical studies.

FAN Ruiping's courageous book addresses the question of what should replace communism in China. He defends a Confucian morality that sharply contrasts with liberal individualism and draws implications for concrete issues like morality in business and health-care reform. The book is both provocative and plausible, and it is a must-read for anybody concerned about China's future. And perhaps it will inspire liberals to question their own commitments.-Daniel A. Bell, Tsinghua University

This is an important volume in contemporary philosophical thought, deeply and creatively rooted in Confucian scholarship. It is the only major attempt in English to capture Confucian thought that does not distort that thought through background Western philosophical assumptions and commitments. Fan’s work will have an enduring impact. In a world in which no one can ignore contemporary Chinese thought, this volume is essential reading.-Nicholas Capaldi, Loyola University New Orleans