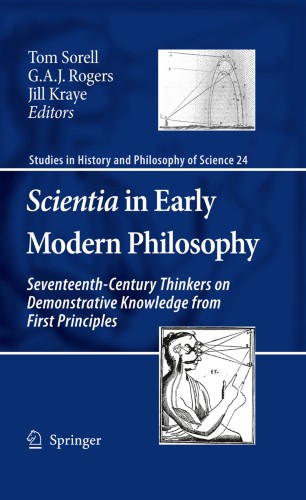 Part of the Studies in History and Philosophy of Science book series (AUST, volume 24)

Scientia is the term that early modern philosophers applied to a certain kind of demonstrative knowledge, the kind whose starting points were appropriate first principles. In pre-modern philosophy, too, scientia was the name for demonstrative knowledge from first principles. But pre-modern and early modern conceptions differ systematically from one another. This book offers a variety of glimpses of this difference by exploring the works of individual philosophers as well as philosophical movements and groupings of the period. Some of the figures are transitional, falling neatly on neither side of the allegiances usually marked by the scholastic/modern distinction. Among the philosophers whose views on scientia are surveyed are Hobbes, Descartes, Spinoza, Gassendi, Locke, and Jungius. The contributors are among the best-known and most influential historians of early modern philosophy.

“This narrowly focused collection of papers seeks to explicate competing notions of scientia in the works of 17th century natural philosophers … . The quality of the entries is consistently high and their variety is refreshing. … The papers can be read profitably by anyone interested in the history and philosophy of science in the early modern period … . this collection will prove extremely useful for a variety of purposes, including the amusement of pedants and the stoking of scholarly debate.” (Scott Stapleford, Philosophy in Review, Vol. 30 (6), December, 2010)

“Here for the first time, a series of clear, informative studies of the foremost early modern thinkers’ conceptions of scientia are brought together under one cover. The nine contributors are a veritable Who’s Who of historians of early modern philosophy and the philosophers covered include some of the leading thinkers of the age … . the volume offers both breadth and depth of coverage. … this collection is a welcome and timely addition to the field.” (Peter R. Anstey, Metascience, Vol. 20, 2011)