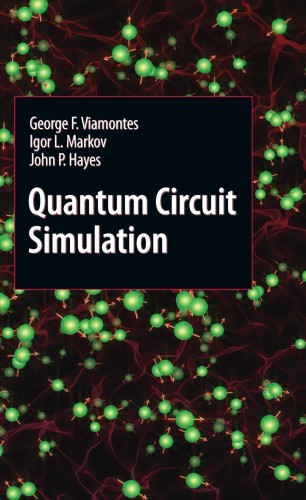 Recent progress in atomic physics, semiconductors, and optical technologies lead to the need to control matter at an unprecedented scale. However, atoms, electrons and photons do not obey laws of classical physics and instead are governed by quantum mechanics. The formalism of quantum circuits promises to transform engineering disciplines the way digital circuits transformed computing, communications, control and measurement. A quantum circuit simulator implemented in software acts as a replacement of an actual quantum system and seeks to calculate the output from the inputs. This is a very difficult task, but researchers have achieved significant progress in many important special cases.

This self-contained book discusses both theoretical and practical aspects of simulating quantum circuits on conventional computers. Engineers can sanity-check and evaluate their designs through simulation before building hardware. Computer scientists can use simulation to compare quantum algorithms to conventional ones. Quantum Circuit Simulation covers the fundamentals of linear algebra and introduces basic concepts of quantum physics needed to understand quantum circuits and algorithms. It requires only basic familiarity with algebra, graph algorithms and computer engineering. After introducing necessary background, the authors describe key simulation techniques that have so far been scattered throughout the research literature in physics, computer science, and computer engineering. Quantum Circuit Simulation also illustrates the development of software for quantum simulation by example of the QuIDDPro package, which is freely available and can be used by students of quantum information as a "quantum calculator."