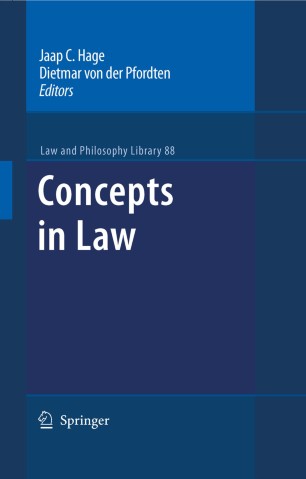 During the last decades, legal theory has focused almost completely on norms, rules and arguments as the constitutive elements of law. Concepts were mostly neglected. The contributions to this volume try to remedy this neglect by elucidating the role concepts play in law from different perspectives. A main aim of this volume is to initiate a debate about concepts in law.

Å ke Frändberg gives an overview of the many different uses of concepts in law and shows amongst others that concepts in the law should not be confused with the role of concepts in descriptions of the law.

Dietmar von der Pfordten criticizes the restriction to norms as parts of the law in contemporary legal theory by questioning what concepts are and what their function is, both in general and in legal conceptual schemes.

Giovanni Sartor assumes the inferential analysis of meaning proposed by Alf Ross in his ground breaking paper Tû-tû and addresses the question how possession of a concept, including the rules defining it, is possible without endorsing these rules.

Jaap Hage argues that 1. legal status words such as 'owner' have a meaning because they denote things or relations in institutional reality, 2. the meaning of these words consists in this denotation relation, 3. knowledge of this meaning presupposes knowledge of the rules governing these words.

Torben Spaak contributes to this volume with an exemplary analysis of one of the most central concepts of the law, namely that of a legal power.

Lorenz Kähler discusses the role of concepts in determining the scope of application of legal rules and raises from this perspective the question to what extent legal concept formation can be arbitrary.

Ralf Poscher argues that as soon as a concept is used in stating the law, the precise scope of application of this concept has become a legal matter. This means that the use of ‘moral’ concepts in the law does not automatically lead to a moral import into the law.

Dennis Patterson holds that Hart’s concept of law can be understood as a so-called ‘practice theory’ and provides an overview of such a theory.