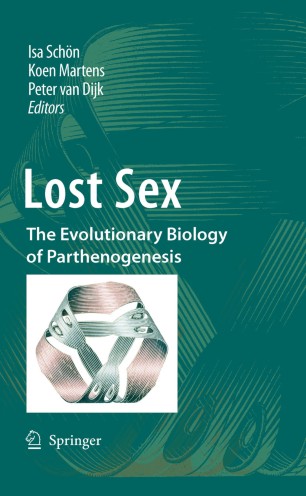 The Evolutionary Biology of Parthenogenesis

Sex is the queen of problems in evolutionary biology. Generations of researchers have investigated one of the last remaining evolutionary paradoxes: why sex exists at all. Given that sexual reproduction is costly from an evolutionary point of view, one could wonder why not all animals and plants reproduce asexually. Dozens of contemporary hypotheses attempt to explain the prevalence of sex and its advantages and predict the early extinction of fully asexual lineages.

The major theme of this book is: what is the fate of animal and plant groups in which sex is lost? Initial chapters discuss theory behind asexual life: what major disadvantages do asexual groups have to face, what are the genetic and ecological consequences and what does this theory predict for more applied aspects of asexual life, for example in agricultural pests, diseases as well as in cultural crops such as grapes. Cases studies in many animals (focusing on both invertebrates and vertebrates) and plants reveal parallel, but also singularly novel adaptations to the absence of meiosis and syngamy. And last but not least, are asexuals really doomed to early extinction or do genuine ancient asexuals exist?

This book assembles contributions from the most important research groups dealing with asexual evolution in eukaryotes. It is a milestone in research on parthenogenesis and will be useful to undergraduate as well as graduate students and to senior researchers in all fields of evolutionary biology, as the paradox of sex remains its queen of problems.

One important issue in the field of a sexual biology is the divergence between botanists and zoologists in language and, possibly, in conceptual understanding.(...)The editors and authors are to be applauded for their considerable efforts to bridge this divide. ...Lost Sex is praiseworthy for its conception and execution. The volume will appeal to both general readers and specialists... It should serve as an unrivaled resource for future studies on asexual organisms. SCIENCE, vol 328, April 2010

“Lost Sex is a wonderful reference work. Its target audience includes biology students and researchers at any level. Given its specialist textbook structure, it can only be recommended to laypeople with a modicum of background reading.” (Alejandra Manjarrez, Lab Times, Issue 1, February, 2011)