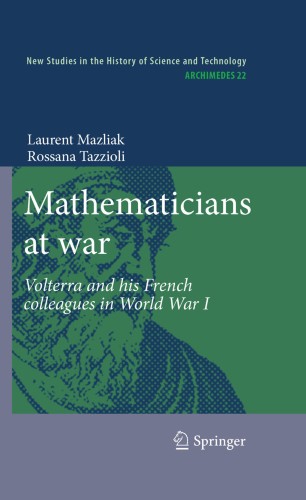 Volterra and his French colleagues in World War I

Numerous scientists have taken part in the war effort during World War I, but few gave it the passionate energy of the prominent Italian mathematician Volterra. As a convinced supporter of the cause of Britain and France, he struggled vigorously to carry Italy into the war in May 1915 and then developed a frenetic activity to support the war effort, going himself to the front, even though he was 55. This activity found an adequate echo with his French colleagues Borel, Hadamard and Picard. The huge correspondence they exchanged during the war, gives an extraordinary view of these activities, and raises numerous fundamental questions about the role of a scientist, and particularly a mathematician during WW I. It also offers a vivid documentation about the intellectual life of  the time ; Volterra’s and Borel’s circles in particular were extremely wide and the range of their interests was not limited to their field of specialization. The book proposes the complete transcription of the aforementioned correspondence, annotated with numerous footnotes to give details on the contents. It also offers a general historical introduction to the context of the letters and several complements on themes related to the academic exchanges between France and Italy during the war.

“The book under review, Volume 22 in the series, is a fascinating investigation into the relations between Italy and France … in the context of the ‘war to end all war,’ World War I. … of interest to mainstream mathematicians … . Mathematicians at War … succeeds incomparably well in bringing toady’s reader into this watershed episode of history. … is good historical scholarship, fitting well under the rubrics of the Archimedes series.” (Michael Berg, The Mathematical Association of America, April, 2010)

“Mathematicians at war appears indeed amid a surge of interest for the rôle of mathematicians in the World war I, especially in France. Mazliak has been quite active in this scholarly effort and the material he and Tazzioli have provided here is a contribution for which all students concerned with this issue will undoubtedly be grateful.” (Jean-Guy Prévost, BSHM Bulletin, Vol. 26, 2011)

“This very readable book fits well into the various large scale research on scientists, in particular mathematicians in World War I, their experiences and activities as well as the consequences for their disciplines. … All the documents have plenty of thorough comments providing the reader with all necessary facts to put the activities of the four scientists in the right context. … The book ends with a list of references containing 58 items, and a name index.”­­­ (Karl-Heinz Schlote, Mathematical Reviews, Issue 2011 c)

“The objective of the book is to present the posture, concerns and hesitation of the four friends about World War I. Considerations of these four eminent mathematicians about the concept of war and about the righteousness and interests of joining the war are present in this correspondence. … This is a very original book, of much interest to those interested in the attitude of specialists, in this case mathematicians, face to a global threat, such as a major war.” (Ubiratan D’Ambrosio, Zentralblatt MATH, Vol. 1201, 2011)